To prepare for our LLC parkour activity tonight, we did four things:

We then headed to Game, a community activity center here in Copenhagen.  Started in 2002, it’s a non-profit street sports organization working to create social change through sports like basketball, football/soccer, and parkour (among others!).  The facility we were in tonight opened in 2010 to create an accessible place to practice these sports year-round.  It’s a cool concept and a cool place to spend an evening!

We got warmed up and learned a little bit more about what we’d be doing as the evening progressed.  For the first part of the evening, another group—one that actually knew what they were doing—was practicing in the parkour gym as well, which was very cool and not at all intimidating.

Our activities involved jumping over and under a variety of blocks and poles and there’s no way to do it justice with words, so here’s some (pretty blurry) pictures I took: 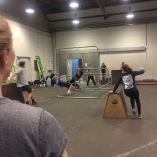 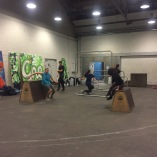 I tried a lot, failed a lot, laughed a lot, got a few bruises, and did not end up in the hospital—all in all, a win!  I’m continually in awe of the people I live with and their enthusiasm for life and willingness to try new things.

In closing, our instructor talked more about the purpose behind parkour.  It’s a sport that grew out of a lot of other sports—and it’s a sport that’s constantly evolving and changing. Never in my life did I think that I would leave Copenhagen with “try parkour” crossed off my bucket list (or even that it would be on my bucket list in the first place) but here we are.  Parkour is often more of a mental battle than a physical one. It’s about listening, really intently, to that voice inside your head.  It’s about taking that first step off a step or first jump over a pole.  It’s about taking risks.  And it’s FUN!

So here’s to an evening of getting off the ground (and sometimes hitting walls, metaphorically and, in one case, literally) and of trying new things.  While I don’t think I’ll be a parkour master (or even, like, relatively good at it) anytime soon, tonight was a good reminder of the motto my mom and I had from this summer: I can do hard things!

Note: I had this whole blogging schedule for the semester all laid out and scheduled to perfection and then life happened and my poor schedule is disappointed in me and so am I.  I have a few blog posts that have been sitting in my drafts, half-written, for about a month now…I’m not proud.  I promise I’ll get caught up soon, and you can look forward to the next installment of Friday Fives tomorrow! I’m traveling on my Long Study Tour next week, so Friday Five might end up being Saturday Five which has no alliteration and is thus 60% less exciting, but it will be full of lots of very exciting pictures of Oslo and London, which will hopefully make up for it!  Midterms week is now over (3 group presentations and one exam later) and I would say my life is returning to normal, but after this weekend I don’t have another weekend here in Copenhagen until November so I don’t think “normal” really exists anymore.

2 thoughts on “if you yell “parkour” while you’re doing it, it’s parkour, or, group parkour”