I had to triple check my calendar when writing out that title, because how have I only been in Copenhagen for two days?

It’s so weird to think that just over 48 hours ago I arrived at the Copenhagen airport, tired from the many hours of flying but over the moon to have finally made it to the beautiful place I get to call home for the next four months!  We’ve packed so many activities into the past few days, each designed by DIS to give us a chance to get out into the city and explore (and unsuccessfully attempt to navigate) Copenhagen.

After a quick trip from the airport with other DIS students, I finally made it to my new home: Holmbladsgade! Don’t ask me to pronounce that please! I can’t! Actually I can’t pronounce literally anything here so the first few days/weeks/months of my Danish class should be interesting.  Apartment/room tour to come at a later date, but we spent the rest of the night unpacking and getting to know each other.  I share an apartment with nine other students; combined with the other apartment on this floor, we make up one of the sections of the Outdoor LLC!  There’s three triples and one single room and we all share the living room and kitchen.

On Sunday, we woke up in various stages of jetlaggedness and had breakfast before a few meetings with our SRA (basically just like an RA in a college dorm, but they’re Danish students) and LLC coordinator, going over the basics of living in an LLC.  We then braved the rain (which varied between a light drizzle and a heavy downpour) for an activity to discover the area around where we live.

The modern gray building with red accents in the middle of the picture is our building! Our LLC shares it with the other section of the Outdoor LLC, the Wake Forest Global Awakenings freshmen program, and a Residential Community.

We live on the island of Amager, which is just south of central Copenhagen!  That night, we decided to do a little night exploration and headed into central Copenhagen, eventually ending up at the sidewalk trampolines.  There were only a few near-falls and don’t worry Nana, none of them were me!

This morning was the DIS Opening Ceremony.  All 1,200 of this semester’s DIS students headed to the Royal Danish Academy of Music for presentations from the Executive Director of DIS along with other faculty and program staff!  Later, one of my roommates (also from Minnesota WOOO) and I went to an optional talk at one of the DIS buildings about how to budget and manage your finances while abroad.  I’m just trying to be fiscally responsible and NOT go broke or at least forstall the inevitable until at least the second-to-last month.  Later, we headed out into the city for a DIScover (I love puns and people who love them) Copenhagen event: at various places of significance scattered around the city, like the Parliament, the Queen’s Castle, and a few churches (definitely my favorite part of the day!).  We also stumbled upon Nyhavn, the classic tourist photo of Copenhagen with the canal, sailboats, and colorful houses.  Photographic proof of canal/sailboats/colorful houses below. 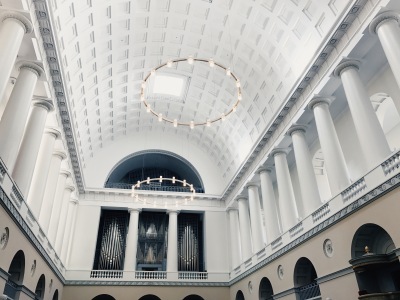 Afterwords, a few of us picked up our bikes.  I wasn’t planning on getting a bike; I’ve had too many bike accidents and not enough practice (i.e. ZERO) biking in a city, biking in traffic, and biking in city traffic.  But one of our LLC activities involves biking around our island, so get a bike I did.  After a slightly traumatizing but accident-free ride home (I DID IT AND I’VE NEVER BEEN MORE PROUD OF MYSELF EVER), I headed back out, this time by myself and sans-bike.  I navigated the metro to meet one of my friends from school—we walked around a new area for both of us and caught up since we hadn’t seen each other since the spring!

Tonight was VERY exciting for us because unlike you amateurs in America who only got to see the eclipse ONCE and had to wear glasses to do it, we watched live NASA coverage and saw the eclipse THREE times and didn’t even have to leave our couch.  Tonight was also very exciting for everyone who watches Game of Thrones and there was a lot of screaming and gasping and fighting zombies?

Check back on Wednesday (approximately) to read about the last few days of the Arrival Workshop!  Hopefully I won’t have caused a 20-bike pile-up between now and then!

One thought on “i biked for 10 minutes and now i’m basically a local, or, arrival workshop days #1-2”